Today we're very proud to introduce Prison's first update which brings in a way to reset your pickaxe's enchants and get some tokens back, a multiplier panel for you to view your active multipliers on and tons of bug fixes.

Continue reading to find out more. 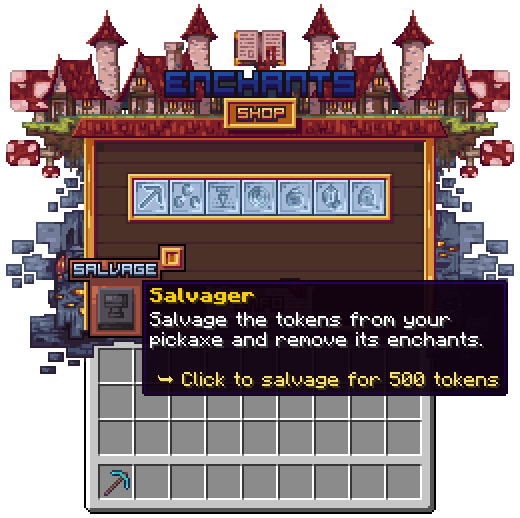 When you click the salvage button, it'll prompt you to confirm this action. Upon confirming it, you'll be given back 50% of the tokens that you spent enchanting that pickaxe and all of the enchants on it will be removed.

Multipliers have been entirely rehauled, there were various bugs and issues with the previous system and most of all it's functionality was awful. We've introduced a new multiplier panel which will divide your multipliers into 3 sections; Personal, Prestige and Rank multipliers.

There were a few issues with the prestige multipliers before we rehauled the system, those issues have now been fixed! If you're currently missing your prestige multipliers, you should receive them upon logging on. If you still don't have them, please open a ticket on our Discord.

We're almost done with this update! Let's discuss the various bug fixes we've made since release (only the important ones are listed here).

That's about it for this update! Have fun getting tokens even more easily now with the salvager, and putting a use to those useless pickaxes with enchants that you have.

Thank you to those who worked on this update, here's a list of credits:

Join us Fri 4th @ 4 PM EST for the Prison Purge where everyone gains access to some very OP, free kits and the ability to grief everything on our current Prison server for 12 hours before the reset!