It's been little over a month since we put out a poll asking whether you, the community, would like Skyblock to reset with new features all on 1.16. We had an astounding positive response to this poll, with 441 people voting yes and 75 people voting no (with another 109 people voting yes since the poll closed!). Well, ever since then we've been hard at work on this new reset, adding tons of new features as well as updating the game to 1.16!

We understand that our communication has been greatly lacking regarding the Skyblock reset and this has many of you rightly worried and frustrated, this update on Skyblock aims to clear things up and provide more communication on what's happening.

In this post we'll cover some of the features you can expect, whether we'll be updating to 1.17 and we'll discuss when everyone should expect the reset to come out.

Continue reading to find out more.

In the past we've made the mistake of giving a release date way too early, causing in either delays or disappointments when it came to the release because we had to rush things. We did that way too many times and the community did not like it, so we want to make sure we don't make that mistake ever again.

For the time being we won't publicly announce a release date or a rough timeline for when we'll release, however, I can discuss what we have done and what's left to do so you can get an idea for yourself.

We've finished the core setup of the server, so all the new features we want, the bug fixes necessary and all the changes are done. Basically, the server is functional in the fact that you can join and play it, however, infrastructure wise, it is not.

We're making some heavy improvements and updates to how our infrastructure works (so all that backend nonsense that you don't quite see). These changes are necessary as they'll make Skyblock run more smoothly, teleporting to your island will actually work more often than not, we'll be able to spin up new island instances a lot quicker and a lot more things will be fixed in general.

Once we've done those changes to the infrastructure we'll begin testing which won't take too long. All in all, we aren't months away from a release but you also shouldn't expect anything very soon.

Every time a new server version is released we do need to wait for all the available server software to also be updated with it, often this takes a while but 1.17's server software is getting to a point where it's almost ready to be used on big public servers.

With that being said we have been having discussions about whether we want to update to 1.17, allowing the new Nether Update and Caves & Cliffs (Part 1) blocks and features to be used on the Skyblock reset. As mentioned before, 1.17 server software is in a decent place right now, but it could also be better, we'll be monitoring how the server software progresses over the next few weeks and then determine whether we want the reset to be 1.17.

The new Skyblock reset will feature a ton of new features, two of which we'll explain in this blog post below! We won't be spoiling all of the other features just yet, so keep in mind there's more to see than what we're going to be discussing! 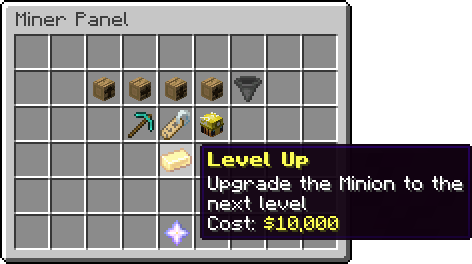 Island Level and Top are back

As everyone is aware, /is level and /is top haven't been working for quite some time now. Island level is one of the biggest features of Skyblock, without it, a sense of progression doesn't really exist. We've fixed both /is level and /is top, here are the following blocks you can use to up your island level.

Anyway, that's it for this blog post! As we get closer to release we'll put out another blog post that goes over more of the specifics of the reset, such as what gets reset and all of the other features you'll see as well as the release date so keep an eye out for that blog post!

We hope that this blog post cleared up some of the confusion surrounding Skyblock's reset!

You can join our Discord to find out more news about Skyblock and more: