Skyblock has officially been updated to the 1.17 Caves & Cliffs update and with this comes tons of new blocks and items, as well as two new spawners and two new ore generator blocks! You can now buy many of the new Caves & Cliffs blocks from the in game shop, mainly through the Caves & Cliffs Shop itself - but you'll also find items all throughout the other shop categories.

Previously, whenever we'd update to an entirely new version of Minecraft we would have to reset Skyblock, however, we're very please to say that this is no longer the case for Skyblock! When we previously reset it, we ensured that updating to a new version wouldn't be so difficult. That means you can log on using version 1.17 and you'll be able to play normally, with all of your stuff still intact!

Please keep in mind that this does mean you can no longer join Skyblock using 1.16! Skyblock is now only accessible using version 1.17.1!

Continue reading to find out about everything that we've added in this 1.17 Skyblock update!

The shop has been updated to include almost all of the new Caves & Cliffs blocks! You can now buy them by accessing the Caves & Cliffs shop by typing /shop. You'll also find numerous other 1.17 items throughout the different shop categories. 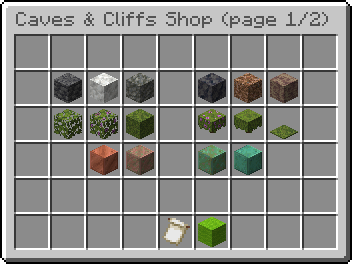 There are tons of new items and blocks that you can obtain through the shop. Other new items or blocks may require you to obtain them through other means such as simply crafting them and so on so forth.

Updating to 1.17 brings some new mobs to the game, two of which we've added in the form of spawners - Glow Squids and Goats! Glow Squids of course drop glow ink sacs and goats drop horns, both spawners are intended for players who have progressed through to the end game, so people who have too much money but not enough to spend it on!

We've added two new blocks to the ore generator; Deepslate and Copper Ore! We decided against adding the other deepslate variants, we didn't feel they were necessary, we did however feel that deepslate itself was a necessary material to add to the ore generator - now there's renewable deepslate, we look forward to seeing your beautiful deepslate builds! 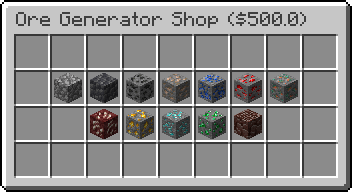 This feature has been a long time in the making and is one of our most requested features, ever. It's finally here - we've been working on it the last few months.

Items that mobs and ores drop will now stack, other items such as regular building blocks will not so when you drop three diamonds, it'll appear as if there's 1 diamond on the ground but a little hologram will appear above that diamond saying there's still 3 - picking up that diamond will then pick up 3 of them!

Spawner stacking is something we really wanted to get right, when we released mob stacking it wasn't something you could optionally opt in and out of, it was something that just happened regardless. In making it a required feature, it helped stop a lot of the lag you saw on Skyblock - however, we didn't want to do that with stacked spawners and so we made sure we didn't.

We've included a cool spawner stacking menu that allows you to view how many spawners are in the stack, as well as add and take spawners away from that stack. Here's a short video showcasing this feature.

Anyway, that's about it for this update! We can't wait to see what you build on your island with the new Caves & Cliffs blocks. Send us pictures to our Twitter! Click here to go to our twitter.

Thank you to everyone who worked on this update, here's a list of credits:

Today comes with some sad news, we'll be shutting down our Pixelmon server January 31st, permanently. Read the blog to find out more.

Information regarding an exploit

An exploit was recently found that affects all Minecraft servers. Chasecraft has patched this exploit, you are safe to play on our servers. Find out more by reading this blog post.